The history of British Hallmarking 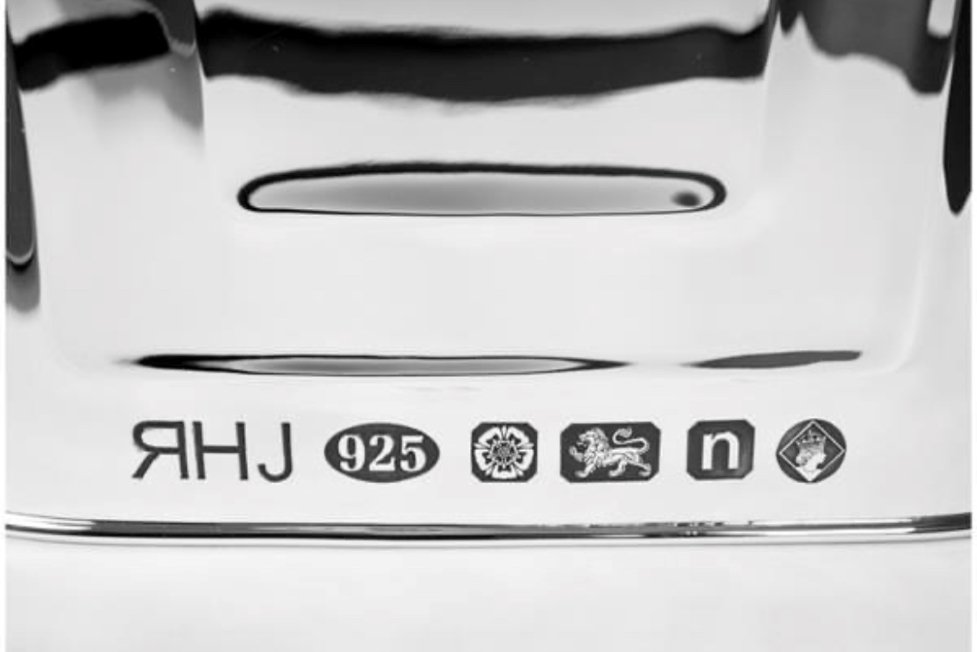 It can be difficult to fully understand the process of British hallmark.

Hopefully, this post will clear up some of the confusion you may be having about the British Hallmarking, particularly, with reference to the Sheffield Silversmith.

The first thing you need to know is that if the silver was made before 1999, you will see a series of 5 symbols. It can only have 3 symbols if it was made in 1999 or after. The reason is that the other two are optional.

According to Wikipedia, in most countries, a silver object intended for commercial sale is stamped with one or more silver hallmarks.

These are to prove the purity of the metal, the manufacturer’s, or silversmith’s mark, and other (optional) markings indicating the year of manufacturing and other extra pieces of information about the piece.

A national assayer’s office oversees the testing of silver objects and the marking of purity in several nations.

British Hallmarking’s are applied with a hammer and punch, which results in sharp edges and metal spurs. As a result, hallmarking is usually done before the object is polished to its final state.

In the United Kingdom, for example, silver hallmarks date from the Middle Ages, and their use as a guarantee of the precious metal’s purity is the country’s oldest form of consumer protection.

The vast majority of English, Scottish, and Irish silver produced in the last 500 years has four or five hallmarks stamped on it. The main function of these marks is to demonstrate that the metal on which they are impressed is of a specified purity level.

Assay offices, which are supervised by the government, are where the metal is tested and marked. The only metal that meets the required specifications will be marked. It’s a type of consumer protection with a nearly 1000-year history.

It would be hard to know all of the numerous hallmarks that can be found on British silver. Fortunately, even a total novice can comprehend the vast majority with the help of a single reference book.

Although there are many books available to aid in the reading of hallmarks, Bradbury’s Book of Hallmarks is the primary reference book used by dealers and collectors worldwide. This small reference book contains all of the marks that are likely to be encountered on a daily basis. The procedure of reading these marks may be broken down into five simple steps. We’ll get into them later.

Sheffield’s Assay Office has been in place since 1773, when local silversmiths banded together with Birmingham petitioners to seek Parliament for their own offices, citing the inconvenient nature of having to transport their wares to London for hallmarking.

Despite the London Goldsmiths’ Company’s intense resistance, an Act of Parliament was approved allowing Sheffield the power to assay silver.

Since the petition’s Select Committee discovered so many abuses by the old Assay Offices at the time, Parliament mandated that the new ones be more strictly regulated.

The Act named thirty local persons as ‘Guardians of the Standard of Wrought Plate within the Town of Sheffield,’ including Thomas, the 3rd Earl of Effingham, to oversee the Office’s operations.

Parliament ensures the proper operation of the Office for the benefit of the consumer rather than the manufacturer by limiting the number of silversmith Guardians to fewer than ten.

Taking the process, a little further, Edward I (1272-1307) was the first to adopt a law requiring all silver to be of sterling standard – 925 parts per thousand purity – establishing a testing or assay system that has lasted over 700 years.

The statute mandated that the Wardens of the Goldsmiths’ Guild stamp all sterling standard objects with a leopard’s head stamp.

The initial silver hallmarking offices were located in London’s Goldsmiths’ Hall, but with time, other assay offices were established.

Today, assay offices can be found in Edinburgh, where hallmarking has been regulated since the 15th century, and Birmingham and Sheffield, where an Act of Parliament established assay offices in 1773.

The creator and year of manufacturing of silver products made in the United Kingdom are determined using British sterling silver hallmarks.

Understanding and recognizing these signs might help you avoid costly and avoidable mistakes when buying and selling old English silver.

This article will explain what each mark on an antique British sterling silver piece means and where to look for them.

You’ve probably heard of the word “sterling” referring to an attribute or quality that someone possesses. For instance, someone can refer to Ben as having a “sterling” performance. The word “sterling” here means the pinnacle of excellence, whether in metal or in a person’s character. That’s the root of Britain’s long usage of the sterling standard.

British sterling is required by law to contain 925 parts silver and 75 parts other alloy metals, or 925/1000. The “sterling standard” is the term for this.

This norm has existed in the United Kingdom for centuries, with most other countries following suit much later. Every portion of a British sterling piece that can be removed must be fully hallmarked.

A teapot with a lid, for example, will have marks on both the pot and the cover.

THE SYMBOLS AND THEIR VARIOUS MEANINGS

If you fail to notice any of these five marks below, chances are that the item is most likely not British or silver-plated. However, if you can find one of these marks on any silver metal, you can be sure it’s British silver and probably assayed in Sheffield.

The duty mark was introduced in 1784 to signify that the item had been subjected to a tax and had been paid to the crown. A profile photograph of the reigning monarch’s head was used as the mark. Since they stopped using it in 1890, the use of this mark wasn’t required again.

To the collector, the key benefit of the duty mark is that it helps you find the date letter.

Letters from A through Z are used to signify dates on British date markers. Each assay town has its own system.

Also, in cycles of twenty letters of the alphabet of different shapes, identify the year in which the piece was verified by the Sheffield Assay Office or any other recognized office.

Despite the fact that it is no longer required, British hallmarks often include a letter to denote the year in which a piece of silver was tested. The letter was often changed once a year until the entire alphabet had been used, at which point the cycle would begin again with a change to the letter’s style or its surrounding shield.

This method was not always followed for a variety of reasons, resulting in anomalies in the tables of marks.

The date letter system, on the other hand, permits antique plates to be dated more precisely than almost all other antiques.

Between 1780 and 1853, the Sheffield assay office used, on small items, a punch with both date letter and crown.

When looking for the date letter, keep in mind that the font, capitalization, and shape of the background, known as the shield, change with each letter cycle. Though only 20 characters are used, it is possible for you to determine which year that particular font and shield combination refers to.

As seen in its name, the town or city mark designates the location where the piece was “assayed” for its silver quality. This can be in London, Sheffield, Birmingham, etc.

The company or individual responsible for delivering a silver item for hallmarking has its own distinctive mark that must be recorded with the assay office. This process has been in place since the 14th century.

The maker’s mark is a group of initials that represent the silversmith’s or company’s name. You find them in a cartouche with the other symbols. On the other hand, this is not always the case.

W & H, representing Walker & Hall of Sheffield, for example, is put within a flag. A crown on top of the initials indicates that the craftsman is a designated crown jeweller for that year, assisting the royal family with repairs and new creations.

There’re so many such that for one to find the marker he needs, he either refers to a book or relies on an auction room or a dealer where the item was bought to really identify the true marker.

This mark denotes the amount of silver in the object. The piece is most likely plated if it lacks one of these marks.

It’s also good to let you know that there are 13 possible purity markers. depending on the purity and the city of origin,

Finally, to legally sell precious metal items in Sheffield, and in the United Kingdom in general, they must be hallmarked.

We guess this article helps you with those simple but necessary steps to easily know any piece of British silver, particularly those assayed in Sheffield.

For any further information please contact Rebecca Joselyn at